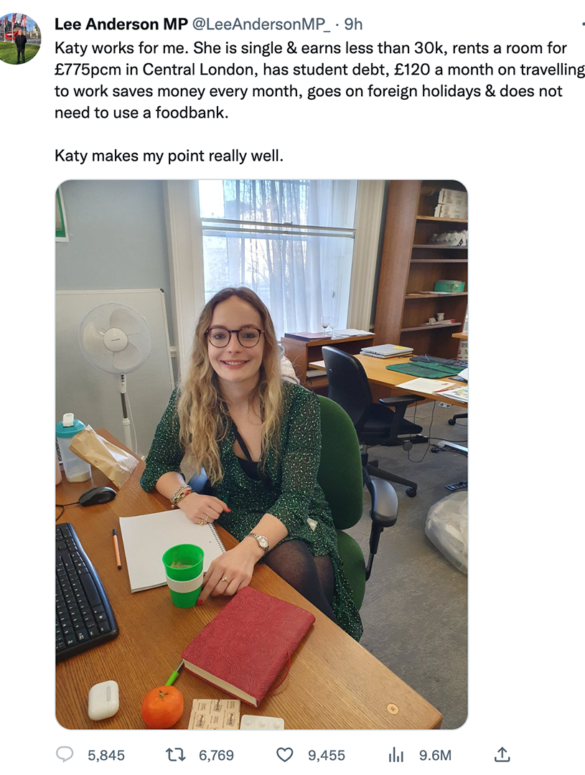 You will live in a box, and you’ll be happy about it

Lee Anderson or 30p Lee as Twitter users have recently crowned him is the Member of Parliament for Ashfield. Elected in 2019, Lee decided in his wisdom to create a Twitter account in December of 2022. In the short while 30p Lee has occupied Twitter, he has taken to tweeting a lot like how your 50-year-old Uncle might have back in 2016. Calling Guardian buyers ‘weirdos’, rallying against people staying in bed all day ‘playing Xbox’, reposting Facebook memes, winding up Steve Bray, explaining that hard work and ‘graft’ is how people find prosperity and not through what he describes as ‘poor me syndrome’, and posting the nasty but funny emails he receives.

Anderson has been nicknamed 30p Lee for repeatedly stating meals can be cooked for 30p. He posted a tweet earlier this month with a stock image of wheat biscuits alongside the caption ‘Just been asked for proof of a 30p breakfast, there you go’.

But Lee took his tweeting to another level today when he publically humiliated his own staffer, a young woman by the name of Katy. As of this article, the tweet has almost ten million views.

Katy, who is single in case anyone is interested, rents a room, not a house, not a flat, but a room in Central London. She spends £120 a month to travel to work as she most likely does not live near enough to walk and she repays her student loan each month. The below table calculates Katy’s income.

It does not include council tax, a tv license, or pension contributions. Lee states in the tweet that Katy earns less than £30,000 a year, but to simplify, we have used £30k as the gross wage.

Her take-home pay each month is £1,997, but as stated, that does not include other bills. Katy also saves according to Lee, let’s say Katy saves the recommended 20% of her take-home pay, so she is saving around £399 a month, but for the sake of simplification again we will round to £400. Using Lee’s tweet, we can deduct £775 for the rent of a single room, and £120 for her travel costs. That leaves Katy with £702. But that money now has to be spent on food, a monthly food bill on average amounts to around £200. Katy is now left with £502. Katy lives in Central London, and a Band D council tax in the City of Westminster is around £800 annually. As Katy only rents a single room, we can assume she splits this perhaps with a flatmate, so Katy’s share of the council tax is £400 annually, or around £33 a month. Leaving Katy with £469. This does not include utility bills such as gas, electricity, and water. The average gas and electricity bill for a two-bed flat amount to around £784, split between the two, Katy has to pay £392 a year, or £33 a month. (Although this seems low to me). For water, the average water bill for a two bed is £319.20 annually, split between two and paid monthly, Katy has to pay £13.30 a month. Katy will most likely have a mobile phone contract, the average monthly bill for that in Britain is £45.60. She will also have to pay for broadband, the average bill is £30 a month, split between two people, Katy has to pay £15 a month.

All in all, Katy is left with about £360 a month spare, but that does not include the following, pension contribution taken from salary, tv license, home maintenance, eating out or ordering food, alcohol, work lunches or coffees, clothing, shoes, toiletries and health products, any type of insurance, activities or hobbies, gym membership, a pet, entertainment or media. Not to mention the fact she only rents a single room, if she wanted to upgrade to a studio, that would most likely wipe out her remaining income.

Of course, we may have completely missed the mark of Katy’s situation, but it was more a general example of how a salary of £30k is spent in Central London. After all, Lee states she still has money to go on foreign holidays even after all of her expenses, known and unknown. That foreign holiday may just be a weekend in Ibiza courtesy of Ryan Air however, not exactly the White Lotus.

Nosy Twitter users have discovered that Katy’s parents are allegedly fairly well off, with Katy attending a private school costing around £20k per year. Wealth is not something to be shamed at all, but it is important to recognise.

Given Katy is single, childless, and from a wealthy family, her financial situation is not the same as a couple with one or two children who have a combined income of £60k. Or even the same as a single man or woman who wishes to rent or even own their own flat, rather than live in a box, house sharing until they are 35. Does someone like that have a life, do they go out, do they meet friends, can they be spontaneous and enjoy their youth, can they start a family, and have guests over? If the answer is no, and it is for many people, you have a failing economy and a failing country.

Lee Anderson is very clearly low IQ, yes he is funny, his tweets make you laugh, he riles the lefties, you could afford a house when you were younger, these young ones need to stop buying avocado, etc, etc. But the problem is, Lee Anderson and people who agree with what he says, grew up in a completely different country.

The country Britain was 30 years ago has gone, it is not right that someone who works for a British MP in Central London is paid £30k and can’t even afford to rent a place of their own. Paying more than 1/3 of their income to live in a box sharing with other people, only someone whose family has wealth and means can do it.

It’s just an observation but many of the young people who work for MPs come from wealthy backgrounds because they are the few who can afford to live on the pay, but also they often have the family connections to obtain the jobs. This is not to make a point about blocking ordinary people from working in politics, it is to make the point that this entrenches an already corrupt and incompetent system, a revolving door of the same families, the same politicians, and the same ideas. Both parties partake in this.

People like Lee think they believe in meritocracy, and think we live in one, but what they really believe in is the country Britain no longer is. Hard work can only get you so far in a system that is rigged in the first place.

Perhaps Lee should be asking why the British university system is churning out graduates with false promises of being paid a decent wage and why a single room in Central London costs £775 a month, which by the way also sounds incredibly low.

So, eat your 30p dry wheat biscuit meals, why should you as a young person eat nice food? Live in your windowless box that sucks up 1/3 of your income, why should you have a nice place to live, landlords have bills to pay you know! Don’t go on any foreign holidays, planes didn’t exist back in my day. Get on your bike and get a workout in travelling to work, what do you need the tube for? It’s good that you don’t use a foodbank but I’d cut down on having any fun, for fun in my day we used to see how long we could go without freezing to death by not using the heating.

Britain has never had it so good.